After studying Latin, Greek and Philosophy at Oxford, Angus worked as a journalist, copywriter and crossword compiler for a few years.  He even won a Bafta for writing a website on a history of communication.  All changed however when Angus passed an art school in London.

He had always enjoyed drawing and painting, and immediately signed up for night school once a week. It was a damascene moment.

Three months later Angus had left the UK and enrolled full time in an atelier in Florence, funding his tuition by compiling crosswords. His first exhibition followed a year later and he hasn't looked back since.

Angus now regularly exhibits in Europe and the US. About half of his work is commission-based. This is usually portraiture or landscapes in oil, and often in the past 14 years connected to golf. He played for Oxford when he was at University, and although he rarely picks up a club now, he rather enjoys painting something he knows so well. The great challenge is not just to paint a course, clubhouse or the members accurately, but to make a beautiful and spirited work of art.  This website contains a small selection of his golfing work.

He currently lives in Italy and the UK with his wife and five children. 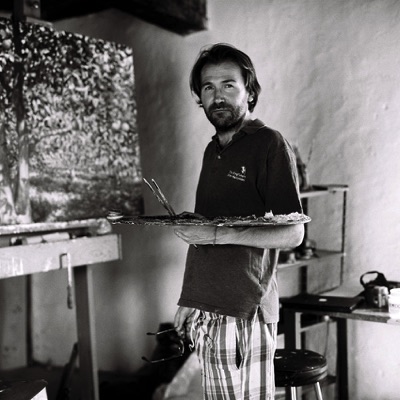